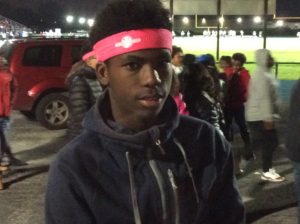 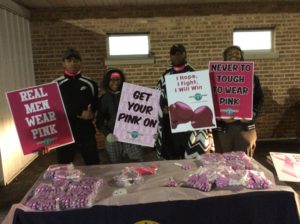 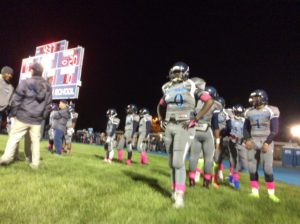 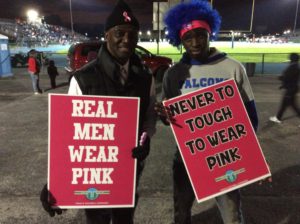 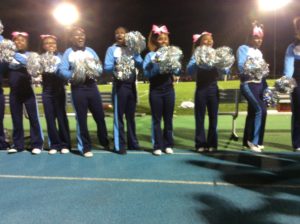 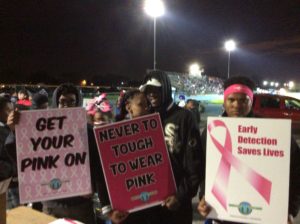 In honor of Breast Cancer Awareness month, Thornton Township and District #205 will sponsor a Pink Out football game this Friday between Thornwood and Thornridge High Schools. Come to the stadium wearing pink and get a free giveaway while they last. 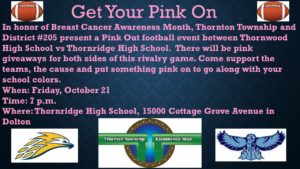 In a room full of 1,200 Thornton Township juniors and seniors, untold stories filled the gymnasium at our youth conference. Their stories were only discovered through raising their hands to rapid fire questions from Cook County Judge William Hooks. When he asked, how many ever had a gun pointed at them or have been shot at, half of the room raised their hands. When he asked how many had a family member or high school friend die because of gun violence, three-fourths of the students raised their hand.  It was overwhelming evidence of what students face in their lives and an opportunity for police officers to build a relationship with students.

“I learned the sometimes police officers are scared themselves,” said Calia Books, 17, a senior at Thornton High School. “It was just nice having them talk with us and realizing that we have a lot in common. You hear about all these ways that we are divided but I enjoyed talking to the police officers.”

“We cannot gun down police officers, and we cannot allow police officers to gun down members of our community,” said Troy O’Quinn, who runs the township’s general assistance program.

Police spent the day helping students understand their rights along with the rules of the law, including cyber bullying, battery, conspiracy and assault.

“Something you do as a 15 or 16-year old, might keep you from getting into college as an 18 or 19-year old,” said Police Officer Luther Haynes, who works in the Englewood area.

The initiative was designed to rebuild trust between youth and law enforcement.

“You are very important to us,” said Frank Zuccarelli, Thornton Township supervisor. “We just had 500 people killed in Chicago just in August and that can’t happen anymore. We have to learn to live together and trust each other.”

The school assembly featured a mix of skits where students played the role of police and vice versa. The day ranged from relaxed joking, thoughtful observation and law enforcement showing their love and respect to students to serious talk about the world we live in.

“Settle issues that are in dispute with a police supervisor, police administrator or in court — not on the scene,” was one of 13 tips on a magnet given to each student. “Remember that every police officer is not ‘out to get you.'”

Police and court officials didn’t necessarily want to scare students straight as much as educate them on the realness of life and the consequences of their actions.

“I’ve seen more pictures of dead bodies as a Chicago court judge than I did at the United States Marine Corp.” said Hooks. “Those who think the gang life is for you when you are standing in front of a judge who is getting ready to give you a life sentence, your whole joking comes to an end. I have seen gang members cry in the courtroom and I have seen hard gang members pee on themselves when they are given a life sentence.”

Various students said they found the youth conference worthwhile and received a lot more from the experience.

“What you see on social media is just one example of cops and those are the ones who are not doing their jobs right,” said Anahi Valdivia, 17, a senior at Thornton Fractional North. “But we got an opportunity to see police who care about us and we had a chance to see them in a different light. We know that all police officers are not bad.”

Cornelius Walker, 17, believes it’s important for students to see police officers in different environments. He liked the fact they answered students’ questions and told them the behind-the-scene world of being an officer.

“We need more programs like this that get students and police talking together,” said Walker, a senior at Thornwood. “We know it is going to take us talking for things to change.”

The initiative for the Faith, Dignity and Respect was inspired out of the tragedy of the South Carolina nine, a mass shooting at African Methodist Episcopal Church in Charleston a year ago.

“They didn’t meet violence with violence,” said Zuccarelli. “Instead of seeing people throw rocks, they did prayer vigil and peace marches and I was touched by what I saw.”

Thornton Township officials plan to organize various events throughout this year and next year to continue the momentum of reaching out to young people.

“We all want peace in this world,” added Zuccarelli. “We want a nice place to sleep at night, we want to have food, have a nice car, maybe someday be married and have children and have good schools in our community. 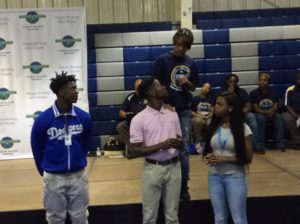 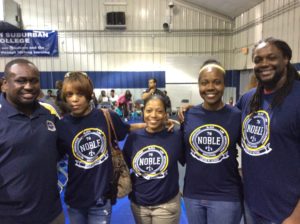 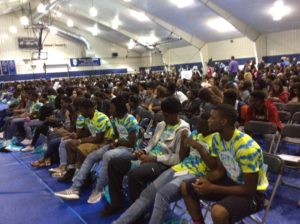 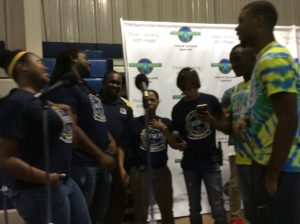 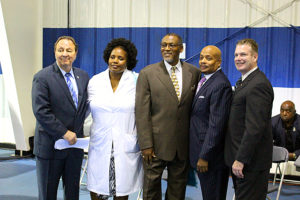 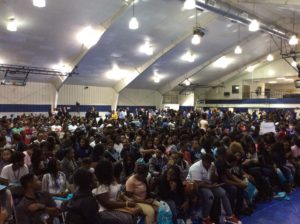 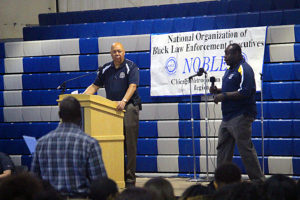 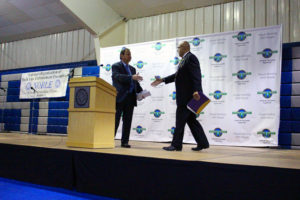 Juan Carlos Linares stood out looking at the crowd of adults and children empowering them to learn more about their rich Hispanic culture and become active in social issues and elections.

“Our Hispanic population can do so much to better the quality of life for ourselves and our children,” said Linares, guest speaker at the annual Thornton Township Hispanic Heritage Month Celebration. “We have a great history and culture, and it’s important for us to take a larger role in the future. And Thornton Township does a great job of community building and offering great programs and services to many people in the south suburbs.”

Linares, executive director of the Latin United Community Housing Association, and his wife, Monica Torres-Linares, spoke to the crowd about the importance of social justice, environmental health and affordable houses. His organization LUCHA serves more than 7,000 families each year helping them with housing, financing, legal questions and best practices for neighborhood development.

“I have a passion for the quality of life issues that affect so many people,” said Linares. “This is a time where people are struggling and they need guidance and help from affordable housing to residents who have to deal with the environmental impact of power plants shutting down in their neighborhoods without companies cleaning up. It leaves residents open to poor water quality and pollution.”

The event also featured Mexican Folklore dancers, magicians, the Holy Cross/Immaculate Heart of Mary Marimba Ensemble and a special tribute to Lionel Valencia, a community advocate. Zuccarelli said the event was an opportunity for people to celebrate various cultures and bring people together for a family-friendly program.

“Every year we try to provide a quality Hispanic Heritage event and the community really does seem to embrace the celebration,” said Oscar M. Canales, a member of the Thornton Township Human Relations Commission who served as master of ceremonies for the event. “This year was incredible and I felt we represented so many different Latinos with this event.”

Creating a variety of diverse programs and celebrating cultures has been one of the man initiatives of the Human Relations Commission and Thornton Township.

“We have to celebrate the many cultures we have in this country. We have to appreciate the variety of cultures that make our communities great,” said Zuccarelli. “Thornton Township strives to give our residents a variety of fun and educational program throughout the year.”

Linares, whose father is Guatemalan and mother is from Peru, said he grew up seeing poverty in their countries as well as income inequality in the United States. He wanted to devote his future career to helping others.  He chose to speak at the Thornton Township event because he believes information much be spread throughout the county about essential issues not just in Chicago.

“Cook County is the second largest county in the United States and we often don’t focus on the areas that are outside of the city,” said Linares, who is also chairman of the Illinois Advisory Committee on the U.S. on Civil Rights. “That is why it’s important for these kinds of events to happen in the south suburbs and other surrounding municipalities.”

Thornton Township is the largest township in Illinois and is made up of all or part of 17 south suburban communities. 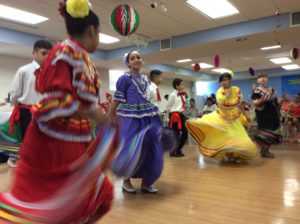 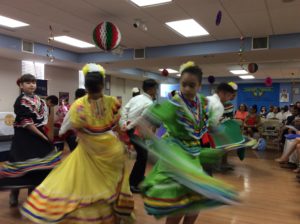 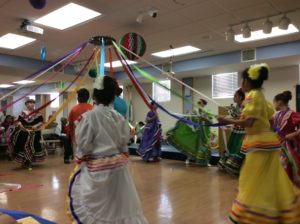 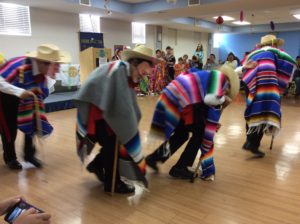 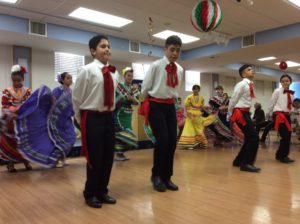