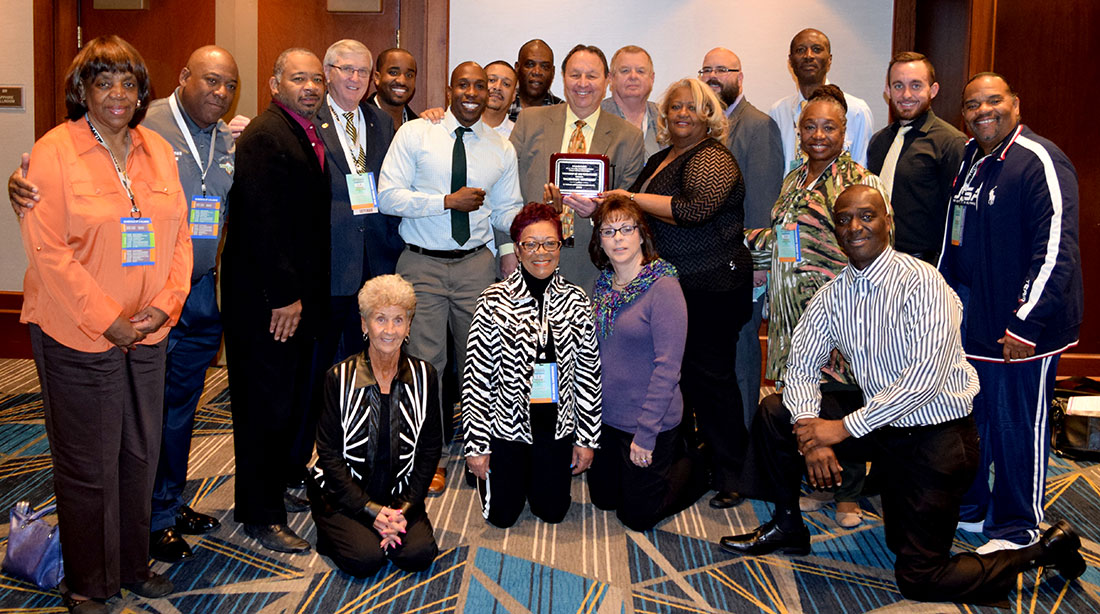 Thornton Township received the Illinois Township of the Year award at the annual Township of Illinois Annual Educational Conference in Springfield. The township received the award previously in 2004 and 2008.
“We are very proud of the hard work our staff does to provide the highest quality of service to our community,” said Frank M. Zuccarelli, Thornton Township supervisor. “Our motto is people working with people and we truly believe that township government is at the ground floor of providing the necessary programs that communities need. We are honored and humbled by this award and that the Township of Illinois recognizes the hard work we have put in this year to help our local residents.”

Thornton Township received the award for many of the programs that continue to run and expand during the past year. Many state run Meals on Wheels programs have cut down the number of days they offer food with many seniors on long waiting list for services.

But at Thornton Township’s Food Assistance Center, they currently serve more than 3,000 families per month with more than 350 boxes of nourishing food delivered each week directly to the homes of senior residents who are shut-ins. the food assistance team continuously talks to residents and asks them about the type of foods they need.
Because of state funding many organization can no longer offer transportation services for seniors. Just this year, Senior Services Plus, which was a bus transportation for seniors, shut down for the first time in 43 years. Some of the Catholic Charities USA around the Chicagoland area had to cut or alter their senior transportation services.

However, the township has filled that void by record number of rides to medical appointments and grocery stores. The Senior Transportation Department provides trips for the people of the Township that are 60-years of age and older. That population, the “Baby Boomers” over 60, is growing every day. For the last three consecutive years, Senior Transportation had broken records for completed trips every year. The township averages picking up more than 160 seniors each weekday.

In addition, with employment higher than the national average in south suburban cities and towns, the township has helped match unemployed residents with purposeful, long-term job opportunities. During the past eighteen months, around 110 township residents have found meaningful, long-term positions and are no longer on General Assistance.
Understanding that in times of budget crunches, collaboration becomes even more important, this aggressive effort is being done in collaboration with South Suburban College, which provides skills-building workshops to help participants develop and present better job interview capabilities. The township also runs GED programs where students can receive more personal attention because we focus on smaller class sizes.

The township also has a robust youth and adult program that features free family counseling and after school tutoring and programs in Dolton and Riverdale.
“We understand the importance of working together for a common goal,” added Zuccarelli. “We are here to serve the people and make sure that we build each other up and we build our communities up. We are able to accomplish this because we have a strong board of trustees who care about the community and a strong management team in all areas working to make sure we provide the best services possible.” 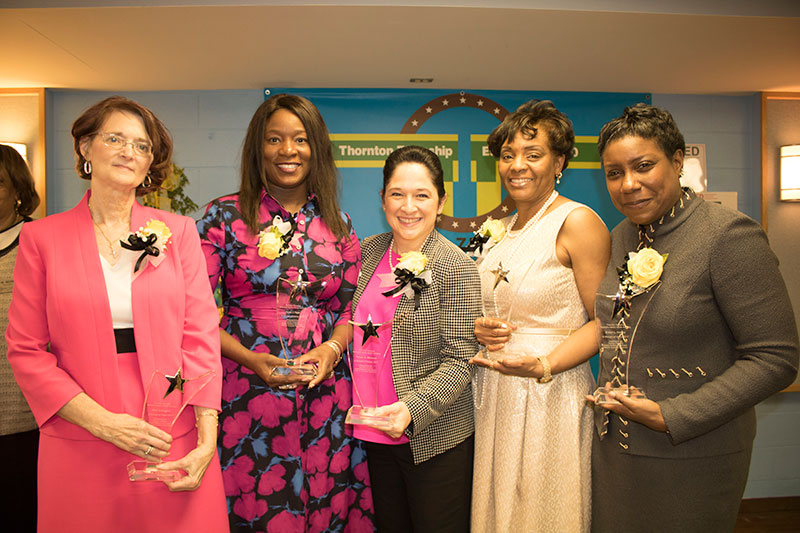 “While they are all in different professions, their common bond is service,” said Thornton Township Supervisor Frank M. Zuccarelli. “They work every day in the community to provide support and a personal touch to those who need help. Serving the public has its challenges, but the challenges never outweigh the reward.”

Each woman took a few minutes to talk about the award and what it meant to them.

“I would not be the woman I am today without my mom and without some incredible mentors,” said Figgs.
I was shocked and honored about being recognized. Originally, I said there is no way I could accept such an honor but my family said ‘yes you are’ and I appreciate it,” said Loggins.

“My school board people, my children and my church I love you all,” said Crisler-Liggons. “Frank Zuccarelli, I also thank you for everything you do for the community.”

“A lot of times we as women feel very hidden. We toil in the background doing what you are supposed to do or sometimes what you don’t want to do because you are doing it for others. I appreciate the hard work of women,” said Holmes.

“Every day I am going to prioritize our most vulnerable people in our lives. Please pray for each other because we as women do so much,” said Mendoza. 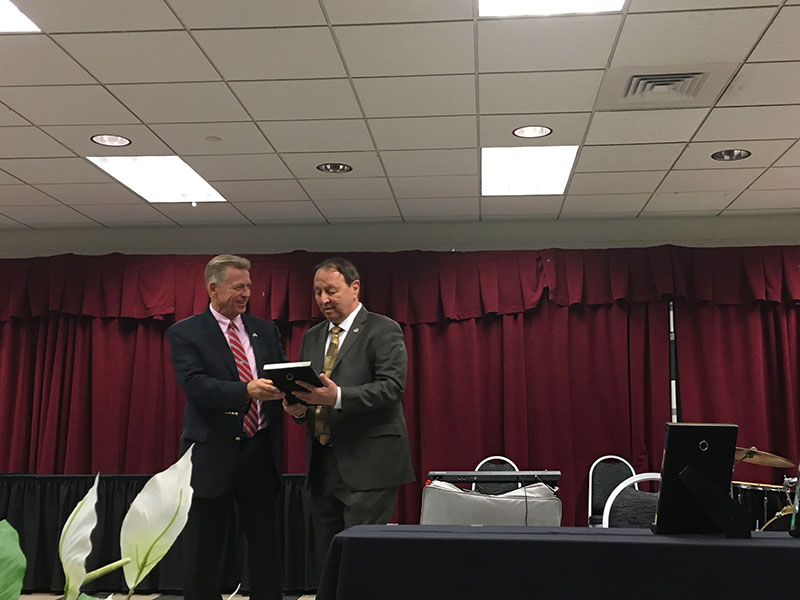 For his lifetime of serving others and his dedication to making the community better for everyone involved, Thornton Township Supervisor Frank M. Zuccarelli was awarded the Community Humanitarian Award by the Village of South Holland. The award acknowledges his tireless work in creating a better life for youth, adults and seniors within Thornton Township.

“I want to thank you for this honor because it means a great deal to me,” said Zuccarelli, of South Holland. “I really think public service is what I was made to do. Can you imagine having a job where every hour of the day you feel so good and fulfilled because you are helping others. It is a wonderful feeling.”

The 2017 Volunteer Appreciation Dinner and Mayor’s Leadership Awards Presentation, which was held at the South Holland Community Center, occurs every two years and honors people who have best exemplified citizenship, faith, family, future and humanitarian actions. For the past 23 years, Zuccarelli has served as Thornton Township Supervisor, the largest township in Illinois. A three-time Township Supervisor of the Year award winner, he created the Faith, Dignity and Respect Initiative bringing together elected officials, law enforcement and community leaders to develop proactive ways to stem the shocking amount of gun violence and community unrest that swept the nation in places like Ferguson, Baltimore, New York and Chicago.

“The award acknowledges your outstanding leadership, bringing together elected officials, law enforcement personnel, and community leaders to develop proactive approaches to fostering an environment of peace and unity,” said South Holland Mayor Don A. De Graff. “By offering vital youth and senior services, by proactively engaging in job creation for constituents of Thornton Township, by reaching out to those who have special needs, and by creating and executing the Faith, Dignity and Respect Initiative, your lifelong work and commitment provide a higher quality of life for those you serve. “

After hearing about a gunman murdering nine innocent people during a Bible study at the Emmanuel African Methodist Episcopal Church in Charleston, South Carolina in 2015, Zuccarelli was affected in many ways. However it was not just by the tragedy but seeing how the community showed its Christian values and pleaded for a peaceful resolution even forgiving the confessed gunman. He brought a delegation to the state to learn how Thornton Township could foster an environment of peace and unity and find out how the South Carolina community could come together in the aftermath of such senseless violence.

The township hosted a conference geared towards adult residents that focused on Community Policing, Mental Health, and Social Justice Issues that was attended by about 300 community leaders and residents. Wanting a comprehensive approach, Thornton Township worked with the National Organization of Black Law Enforcement to organized a Youth Conference last year attended by more than 1,200 Thornton Township juniors and seniors from six different high schools. It provided specific training on topics such as the law and their rights, and the importance of appropriate reaction in case of a traffic stop to best avoid unnecessary confrontation that could lead to excessive use of force. For its continued efforts to serve the community, Thornton Township was recently awarded Township of the Year.
Zuccarelli, who has lived in South Holland for more than 50 years, said he immediately felt a connection to the community even though he joked “when my family moved here I didn’t even know what a Holland was.” He has come to know that and more about the community.

“I love this community and I love the people I meet here every day,” said Zuccarelli. “There is something good about everyone. I was so lucky to be elected township supervisor because everything we do in this community is about being a humanitarian.”

The 2017 awards were also given to Dr. Kathryn F. Worthen, Father Ignatius I. Anaele, Felecia A. Williams and Robin Scheldberg.

“I consider Frank not only a great ambassador to the school but also a great friend,” said Manning. “Under Frank’s leadership, the college has improved and provided cutting edge workforce training to the residents in the district.”