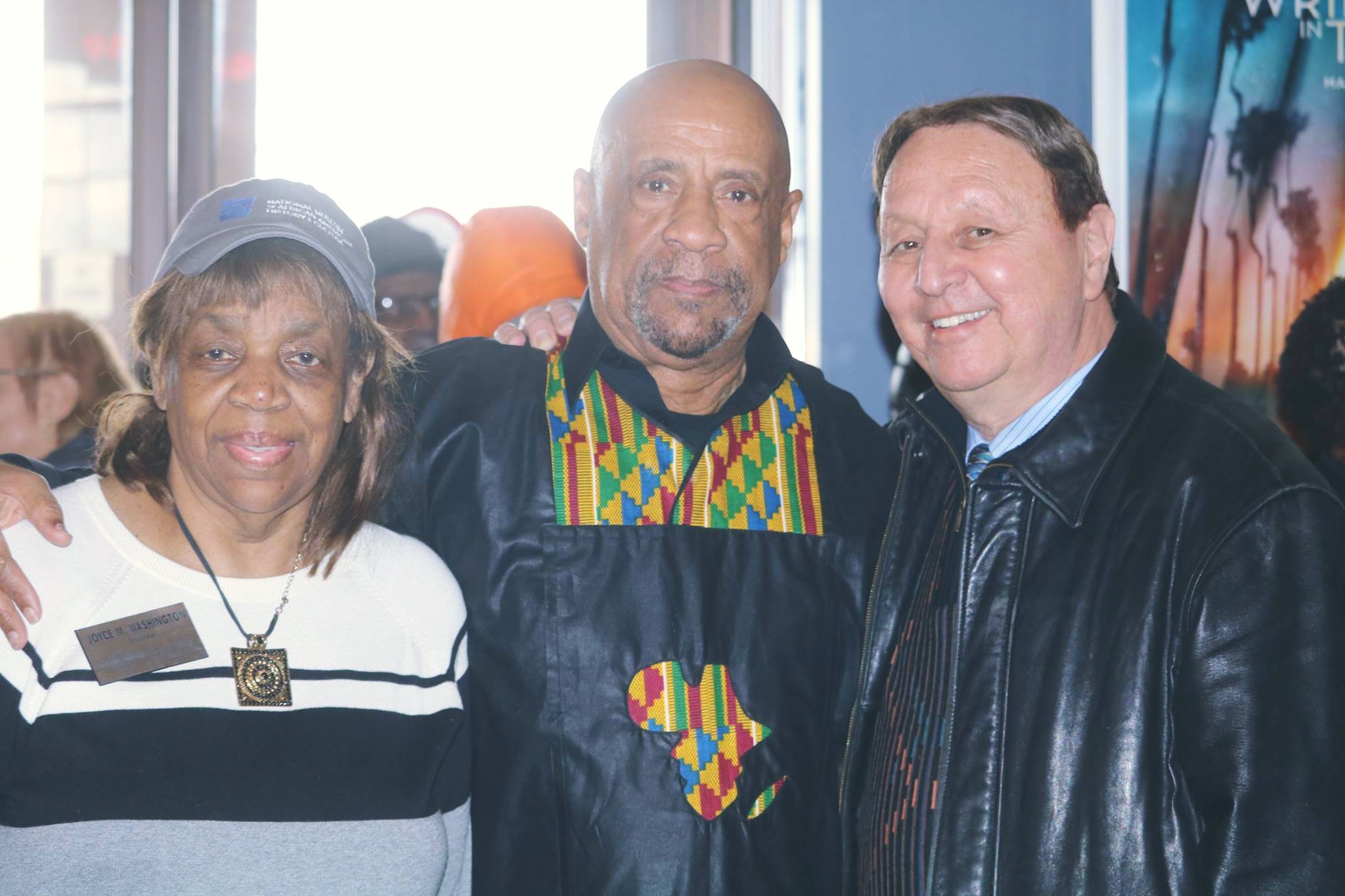 BY ERNST LAMOTHE AND MELANIE JONGSMA

LANSING, Ill. (February 18, 2018) – “Learn the true significance of the Black Panther Party during the 60s and 70s first hand, and then watch a free private screening of Marvel’s Black Panther, the first major movie featuring a Black superhero,” read the February 7 email invitation from Thornton Township. The township hosts an event every year in observance of Black History Month, and this year’s release of the Black Panther movie opened up some new opportunities.

The February 16 event combined a free, private showing of the movie with a 20-minute presentation by Dr. Jamal Turner, a former member of the Black Panther Party. An estimated 600 people lined up outside the doors of Lansing’s Cinema 8 theater, per instructions they had received via email during the week leading up to the event. Clear communication and plenty of volunteers helped ensure efficient flow of the excited crowd into two separate theaters, beginning at 9:15 on a Friday morning.

Rather than simply provide a description of the event or a review of the movie, The Lansing Journal and Thornton Township decided to take a different approach. Ernst Lamothe, Thornton Township’s Director of Community and Public Relations, and Melanie Jongsma, Managing Editor at The Lansing Journal, interviewed each other about the experience. That conversation appears in question/answer format below:

How did the idea come about to have a Black Panther event? Did you book Dr. Jamal Turner first, or did you think of the movie first and then work to make a connection with the Black Panther movement?

The event was the brainchild of Dr. Jerry Weems, our Youth and Family Services Director. He thought about ways to continue to elevate our Black History Month program. Last year, for example, we had the outstanding Dick Gregory—a civil rights activist, author, comedian, and leader. (We were fortunate to have him, especially since he passed away late last year.) Then the idea came around connecting the Black Panther movie but finding a way to also educate people about the Black Panther organization. It almost happened simultaneously—the idea of a private screening of the movie as well as connecting with Dr. Turner, who is a good friend of Dr. Weems.

What did you find interesting about the event? Why did you want to participate?

I first learned about the Black Panther superhero from Ta-Nehisi Coates a couple years ago. I have followed Coates’ writing for The Atlantic, and when he began scripting a new Black Panther graphic novel, he shared that experience with Atlantic readers. It was a new kind of writing for him, and he talked about the similarities and differences between comic book writing and journalism. Coates also talked about what superheroes meant to him as a child in Baltimore, and how meaningful it was for him to be working on Black Panther. So I was eager to see the movie because of what I learned about the character from a writer I respect. For Thornton Township to add Dr. Jamal Turner and make the connection to the real-life Black Panther movement—that was just the perfect bonus.

There is a lot of misinformation about the Black Panther organization. This is an organization that cooked thousands of meals a week for poor children, set up free health clinics, set up tuition-free schools, went to schools like Yale University to preach about the importance of being drug-free, and helped various other marginalized groups get the fair treatment they deserve. PBS had an excellent special about some of the incredible work that the organization did. Unfortunately not everyone gets taught the nuances and rich history of many people. So often, when history is not taught thoroughly, then people don’t always seek out the truth.

You’re right. The impression I grew up with was that the Black Panthers were a militant, angry movement, and I never thought to question that perception. But Dr. Turner gave us a more well-rounded understanding. He talked about the real sense of community that was so important to the movement, and the sacrifice and brotherhood that were necessary in order to create that community. It really shifted my perception of the Black Panthers. I’m glad I had the opportunity to learn that.

That’s in line with our biggest hope for the event—we wanted people in the community to not only celebrate the rich history and contributions that black people have made throughout the world, but also remind people that Black History is American History. This was more than just a private screening of one of the most hyped movies of the year. This was an awareness opportunity. In fact, one of the giveaways we gave each attendee was Black History flash cards—we want people to know this history! We want people to know these incredible facts about a lot of incredible people.
You might have noticed we had a lot of teenagers at the event. What message do you hope they took from the speech and the movie?

Both Dr. Turner and the movie gave a picture of what it’s like to have a purpose beyond yourself. The movie in particular showed the struggle between wanting to isolate and protect “our own,” or choosing to help others and broaden the community. I like that the movie presented those as both valid, understandable choices that will each have different complicated consequences. I hope the teens at the event left with an eagerness to find ways to keep making life better. I hope they feel inspired to keep learning, keep improving, keep exploring. I hope they know that whatever their passion is—technology, music, labor, leadership, family—they can use that to contribute to a community we can all be proud of.

That’s interesting that you mention that. A young woman told me something after the show that will really stick with me. She said there was so much to learn about how much stronger we are when we’re together than when we’re apart. She said we sometimes only talk about the small amount of things that we disagree on, and we don’t really spend much time talking about what we agree on—even though that’s probably the majority. Her takeaway from the movie was that it showed that divisiveness and isolation never help anyone. Those are strong words that you don’t often get from someone who just saw a superhero movie! That’s why this movie was so much more than just another superhero movie.

I agree. I mean, if you want to see a good superhero movie, yes, Black Panther is a great choice. It’s filled with action and surprises and fights and chases! But it’s so much more than that. It was like a history lesson, and a glimpse of the future, and inspiration for now—all wrapped up in elements of Star Trek, the Chronicles of Narnia, Jumanji, and James Bond.

Before opening weekend, the movie was being called “historic,” “groundbreaking,” “momentous.” Did you think it lived up to all that hype?

Definitely! And that really is an incredible thing to say because there was a lot of hype about this movie—not just for weeks, but probably for the last six months. You do not see a lot of movies that have an all black cast that open number one at the box office! Even though recently there has been more success in that area, there is still a stigma that a movie with an all black cast that performs well in the United States won’t do well overseas. However, when you look at the opening weekend numbers for Black Panther, it has shattered both those stereotypes.

I’m glad Thornton Township came up with this innovative idea. An event of this stature really has to be initiated at the township level. I’m also glad that Mayor Eidam was able to give the necessary support so that Lansing could host the event. This is something our community can be proud of. And Thornton Township’s motto— “People helping people” —really takes on additional significance in light of the Black Panther themes.

I got to Cinema 8 early that morning to set up, and I could see people starting to line up outside in the cold already at 8:20am. The doors wouldn’t open until 9:15am, but they wanted to be able to get the perfect seats to see the movie. That meant a lot to me. And then, when the show started, to see and hear people clapping, laughing out loud, and just joyous throughout both screenings—that was wonderful. It was heartwarming to know that this event truly resonated with people.

I’m glad so many people enjoyed it. It really turned out even better than I thought. It was a lot of work, but when you see that many people happy with the experience—it’s all worth it. 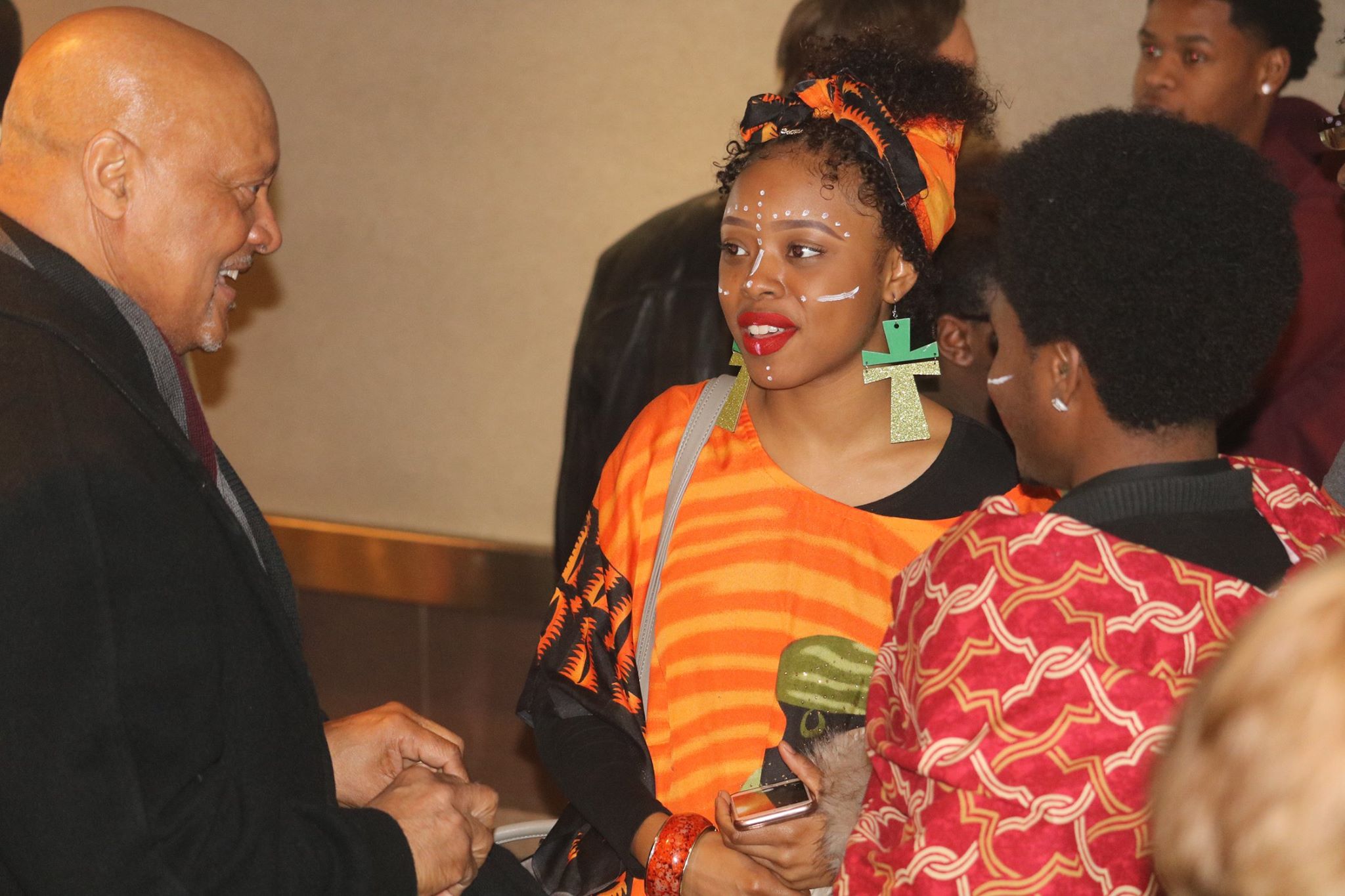 I had the pleasure of connecting with Thornton Township to witness the debut of Black Panther with the community, Feb. 16 at Cinema 8 in Lansing. Royal purple carpets, wristbands, goodie bags with Black History Flashcards, including free snacks and beverages were gifted to the community members for their support in making the day great. The Movie theater was filled with love from the Elders, Generation X, Baby Boomers, and the Millennials who all seemed to take away the great message the movie had to offer which was “We are stronger united than we are divided”. Can you think of any significant way to spend black history month?

There were many other messages that were encoded but the message mentioned above was commonly received by the guest. I cried many times during the movie: tears of joy, tears of realization, tears of sadness, and tears of anger. Black Panther reminded me of my constant duty to the community, and Dr. Jamal Turner, the keynote speaker in theater one, spoke to us about his experience as a real life Black Panther. Thornton Township was thanked by many guests for doing such a wonderful thing for the community because they provided an opportunity, “To those who probably couldn’t afford movie tickets” as said by Jouhan Sawe, a Thornton Township community member and employee. Another guest, Jeanette Quin said “Everything was perfect. The movie, how the event was put together, and how smooth it flowed. We were right on time and I thank them for hosting the event.” It’s more than safe to say that the community is looking forward to more remarkable things happening in Thornton Township. I know I had a marvelous time dressed in full regalia, bonding with the people, and being of service to the community. Can’t wait to see what they have in store for the rest of the month, and I hope to see you at the next outing or social.

Due to the really cold weather, Thornton Township Supervisor Frank M. Zuccarelli and the Board of Trustees arranged a free coats giveaway for kids and adults. The township gave away hundreds of new coats to residents.

“We understand the need in the community is great, and we are here to support our residents in any way possible,” said Zuccarelli.

This was the first time the township did a large scale coat giveaway. Officials said they saw a significant need in the community. The township also reached out to homeless and battered women shelters as well as veterans.

“It has been an incredibly early cold winter this year, and we know there are residents that could use coats and hats. We enjoy helping out our community,” said Ernst Lamothe Jr., Thornton Township public and community relations manager.