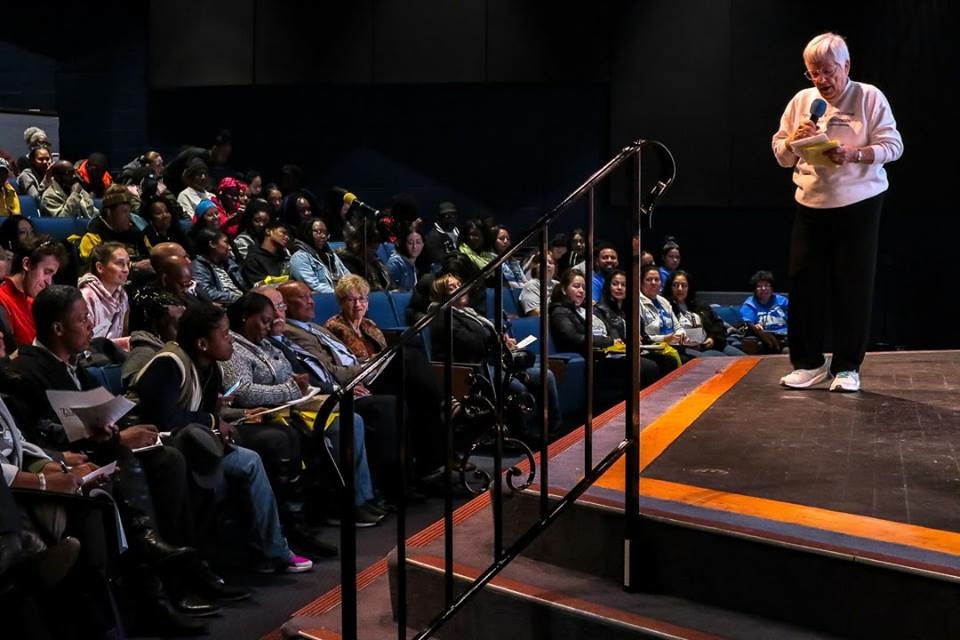 By Ernst Lamothe Jr.
In a room filled with community members, students and legislators, Thornton Township was the site of two acclimated speakers who talked to the crowd about unconscious and conscious bias. Presented by the township Human Relations Commission, the event held at South Suburban College featured Dr. James Lawrence and Jane Elliot, who is most known for her groundbreaking “Blue eyes-Brown eyes” experiment. More than 320 people came to the event.

“We decided to bring Jane Elliot to Thornton Township because she is a dynamic woman who brings an interesting perspective but people need to hear,” said Dr. Jerry Weems, director of youth and family services at Thornton Township. “The community has responded well to us bringing global speakers like Jane and Dick Gregory.”
A former third grade teacher, Elliot has spent most of her life as an anti-racism activist and educator.

“If you want to be a racist, you go and be a racist. But if you bring it to me, you will learn very very shortly that your problem is ignorance,” said Elliot. “It is not skin color but your ignorance about skin color and I will not tolerate it.”

“It is important to have these open conversations about conscious and unconscious bias. We can’t shy away from these important discussions because that’s how we can grow as a nation and grow individually,” said Ernst Lamothe Jr., communication manager at Thornton Township/

“When we do unconscious bias corporate training, we talk about this awareness piece and that is one step,” said James., “It is just one step where people are made aware that they are kind of bias and can be kind of racist. But then we expect them after one day that they are going to change their lives and do something new and that is not the case. This has to be more than simply a one day conversation.”