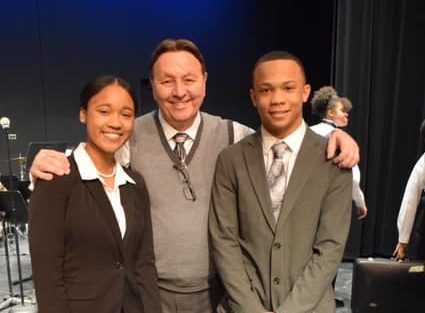 Thornton Township and community partners Alpha Kappa Alpha Sorority (Theta Rho Omega Chapter) and School District 205 assembled at South Suburban Colleges’ Kindig Performing Arts Center to celebrate the life and achievements of Dr. Martin Luther King Jr., an influential American civil rights leader. His memory was celebrated by the smooth jazz sounds of the Gwendolyn Brooks Middle School Jazz Band and School District 205 student whom participated in the festivities by sharing their creative appreciation for such an import figure in our nation’s history.

Poets and praise dancers from Thornwood High School performed selections on stage like “Still I Rise” and “The Hate You Give”. The celebration demonstrated the excellence of Thornton Townships youth, arts community, and musicians. We were proud to have our student organizations be a part of it. One audience member, Colby Chapman, a woman looking to make history by becoming the first black, female Alderman of the 2nd ward in the city of Harvey, IL, said “My experience was phenomenal, the performances were amazing, especially the youth, who creatively expressed themselves. It was beautiful to look across the crown to behold a sea of diversity and all those who embody the vision and mission of Dr. King,” Chapman says that she heard about the event via social media and the Thornton Township newsletter.

The keynote speaker, Rev. Dr. Ozzie Smith Jr., the Senior Pastor at Covenant Community Church of Christ serenaded the audience with a melodic selection on the clarinet before delivering a motivational and impactful message to the youth and other attendees at the celebration of life. The majority of the youth in attendance belonged to the Chicagoland chapter of, Top Teens of America, an organization that helps mold our future leaders by offering career and character development training. These youth look to make a difference in the communities in which the live by volunteering.

A parent of one of the future leaders and a resident of Thornton Township, Kiaundra Pope says “I heard so many powerful words of encouragement and it motivated me to further my dreams. It reminded me that it is never too late to accomplish your goals no matter the obstacles or circumstances.” This event showed us that Martin Luther King Jr. Day, is not just a day off, but a day to reflect. Dr. King is most well-known for his campaigns to end racial segregation on public transport and fighting to for racial equality in the United States. He was an advocate of non-violent protest and became the youngest man to be awarded the Nobel Peace Prize in 1964 before he was assassinated in 1968. This event showed us that Dr. Kings’ dream is still alive and being survived by the children in our community that celebrate his life and vision through art, speech and music.