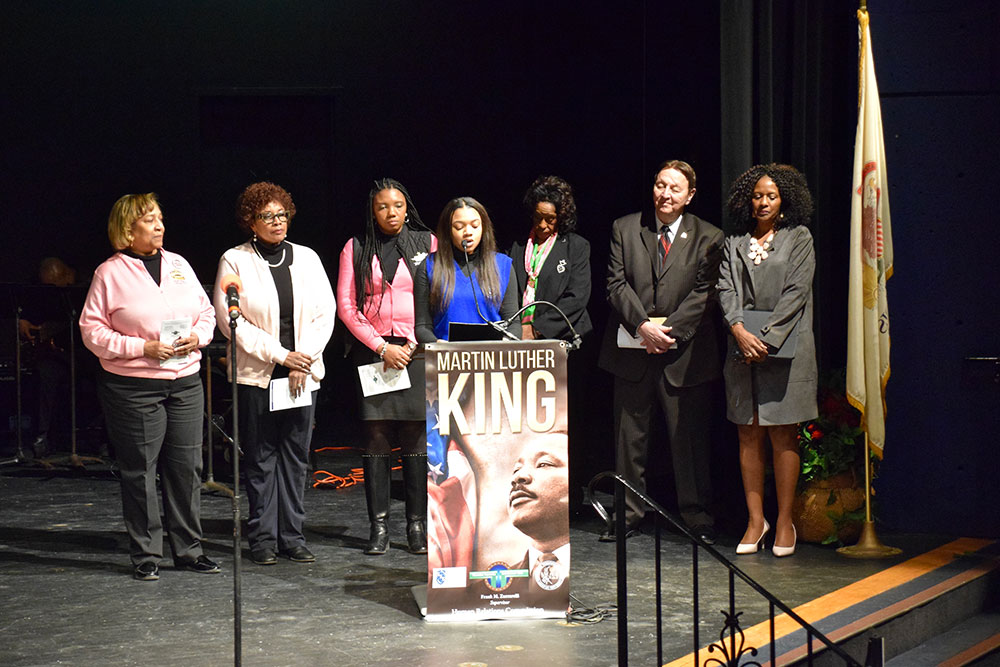 “Love everyone, don’t hate, fairness, nonviolence, and equality were a few morals and principles Dr. King implemented in his lifetime,” said Linda Wyley, of Chicago, who attended the event. “He set a great example for the young people. MLK was just a great role model.”

This event was a great way to bring several people from many different backgrounds together in one place. With special appearances from District 205 and 150 band and mixed choir, Jada Johnson, Dyimond Moore, Zion Hurndon, Kayode Adebogun and keynote speaker Dr. Chandra Gill.

The keynote speaker Dr. Chandra Gill CEO of “Blackademically Speaking,” went through several themes during her speech that touched personal moments for everyone who attended.

She preached, educated and shared some life stories. Some of the wise words from her included “You are not going to give a beggar $50 because they asked for it,  so America isn’t going to give you freedom because you asked for it. You have to fight for it.”

Dr. Gill made that message clear and she said it is as easy as ABC.

Dr. King was an African American Christian minister and activist who lead the Civil Rights movement from 1955 until his assassination in 1968. Some would say they know him from his “I Have A Dream” speech; however, Dr. King was more than just one speech. He risked his life daily to lead, fight, and speak for a large sum of the American population. He championed people being treated equally and having basic human rights. Dr. King led the Montgomery Bus Boycott, the march on Washington, the Civil Rights Act and the Voting Rights Act. He was by far one of America’s most selfless leaders in American history. It is only right to have a day out of the year to celebrate and remember all that he accomplished in his short 39 years of life.

Dr. King once said, “The ultimate measure of a man is not where he stands in moments of comfort and convenience, but where he stands at times of challenge and controversy.” With all Dr. King did for his people, he stood tall by this sentiment.

Thornton Township would like to thank everyone who helped with the event and everyone who came out to the event. Please join us at our future events and next year when we host the next Martin Luther King Day Celebration.