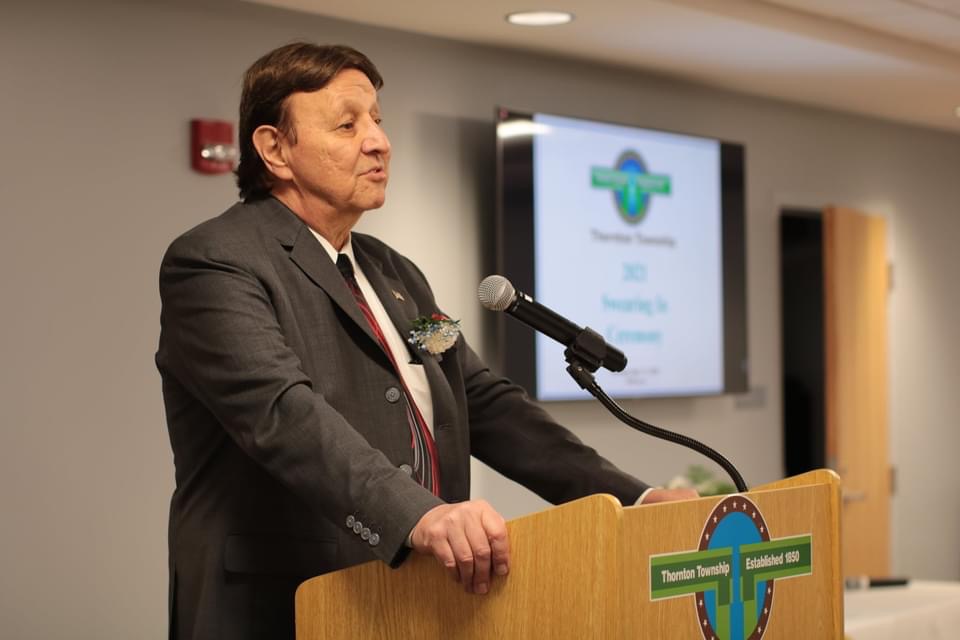 Brimming with happiness and charting a path to the future Thornton Township Supervisor Frank M. Zuccarelli was sworn in this week to his eighth term in that position.

“When you run for office don’t be overly excited and just say you are the man or the woman. The people will let you know that as government officials we serve the people,” said Zuccarelli, who has served since 1993.I am so thankful for all the people who have helped me in my career.

He has been awarded township Supervisor of the Year in 1996, 2007 and 2012; and the township has been awarded Township of the Year three times by the Township Officials of Illinois Educational Conference. As a long standing elected official, Zuccarelli is the recipient of numerous awards and honors during his years serving as a public servant; to name a few: Township Officials of Illinois Township of the Year, multiple Supervisor of the Year awards; The Chicago Food Depository awards for War on Hunger and Quality Service, Community Leader; Civic Responsibility Award; Diversity Inc. Award; the Distinguished Service Award from the Illinois Committee for Honest Government and countless other awards and honors.

“Always understand you have to be respectful of the people who elected you and the people who are on your board,” said Zucarelli. “I think about everyone in the community. I love Thornton Township and I am not going anywhere yet. We have a few more things we want to do.”

There were many people who had kind words for Zuccaelli, including the man who introduced him.
“You have to want to work with people and have it in your heart,” said Donald Manning, former president of South Suburban College. “If you tell someone you are going to do something for them you have to follow through and do it.”

Joyce M. Washington is the longest serving trustee board member, elected in 1997. Trustee Gerald “Jerry” Jones has served since 2013.